The tableaus Frederiksen embroiders exist in the time right before something happens, or shortly after consequences have been established. This ambiguity is highlighted in a number of multi-panel works that serve as individual frames for animated images of doors.  Frederiken writes: “It’s no surprise that doors are taking up such prominent real estate in my head: we’re into the second year of spending most of our time locked inside… Stay inside and you’re safe, or unlock your door and open yourself up to whatever exists outside of your four walls.” In these works, doors bend from unknown hammering forces and light flickers through a keyhole as a peeping figure peers from the other side. In Won’t hold forever (2021), the ominous threat seems to have escalated as multiple daggers, swords, and an ax have been lodged into a closed door.

This potential for violence is reflected across a number of other embroideries. Silhouetted figures appear in works like Scared to leave, scared to stay (2021) and It comes for you, whether you planned for it or not (2021), drawing guns or even shooting them into the air. A mob of club-boasting figures parades through a scene in another work. Each leaves viewers to imagine the events leading up to the depicted frame as well as the aftermath of these climactic situations. Still, Frederiksen provides plenty of foils for these sinister displays. In Heavier than it looks (2021) a cartoon figure comically struggles to lift a sword, while faulty baseball gloves in Set up for failure (2021) promise laughable outcomes. Optimism is forged in one of the shows diptychs, Everything’s great (2021), depicting a thumbs-up gesture projected across the sky. Whether futile or not, this sense of hope and joy sings through the shows darker moments.

Humor resonates further in the exhibition through Frederiksen’s introduction of sewn soft sculpture. A larger than life dollar bill is suspended from the gallery’s ceiling  by a fish hook, tempting visitors below. Another sewn dollar bill is positioned for the taking underneath a box propped up by a stick, bringing this common trope of classic animation into the real world. Together with the exhibition’s embroideries, and akin to the cartoons that Frederiksen draws inspiration from, the sculptures provide a tongue-in-cheek take on the uncertainty of contemporary life.

Peter Frederiksen (b. 1987) lives and works in Chicago. He attended the School of the Art Institute of Chicago, focusing studies on painting, drawing, and fibers. His work has been exhibited extensively in Chicago, and most recently in London and Milan, and can be found in numerous private collections. Human Cannon Ball is his second solo show with Galleri Urbane, following his sold-out exhibition In Stitches in 2020. 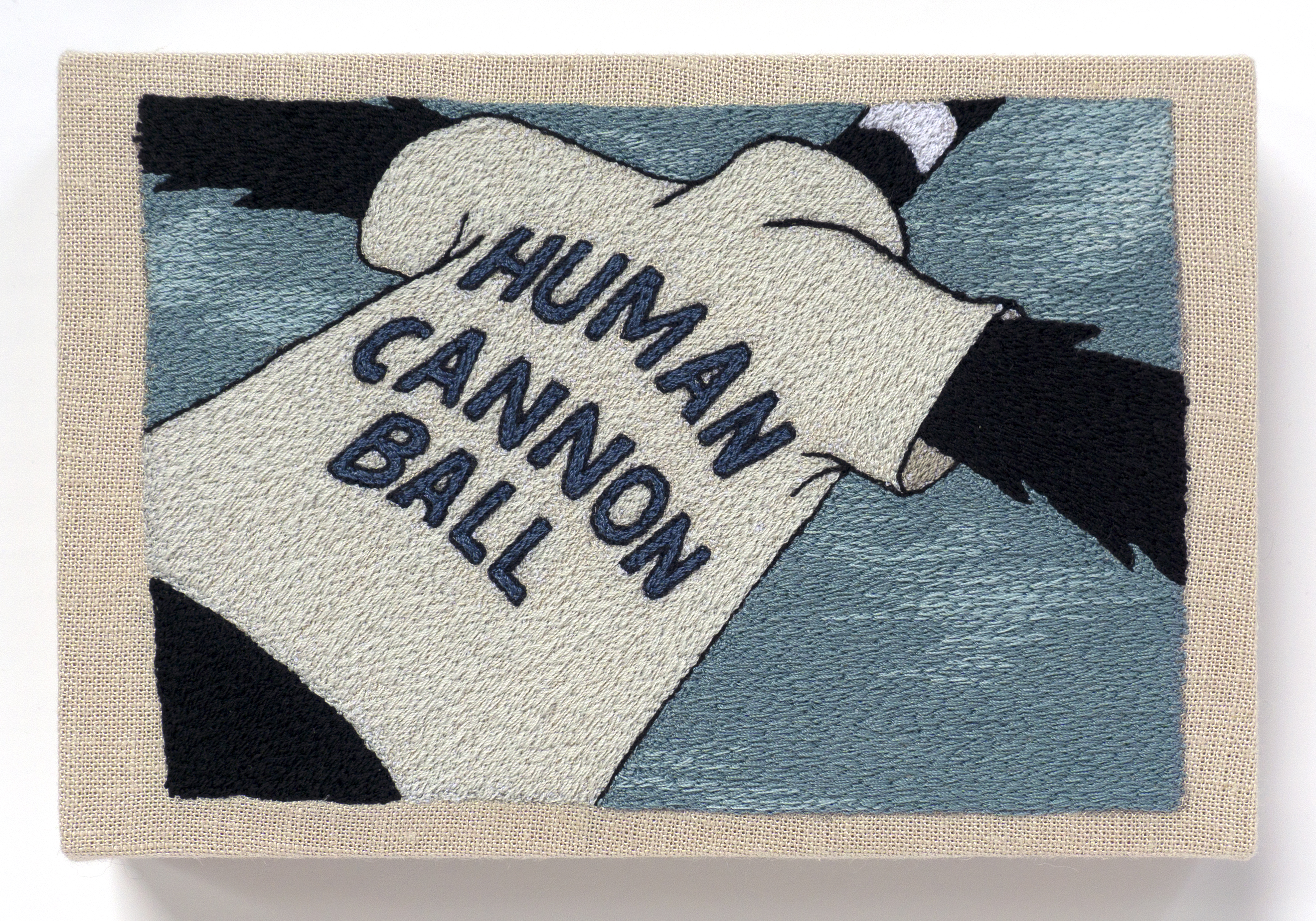