The decade marks a historic turn in art history for photography. No longer was traditional landscape and documentary photography the same. Photography shared the spotlight with painting.

The subject of American landscape became not the natural but the altered. Images of our urban, and suburban landscapes by Ed Ruscha, Robert Adams and Bill Owens took hold. Garry Winogrand manically photographed the streets, brilliantly capturing people in moments of joy, oddity, drama, sport and truth. Major artists like John Baldessari, Lucas Samaras, Robert Rauschenberg, incorporated photography in their work. Feminist artists were reacting viscerally to their lack of equality. Ana Medieta used photography to document her powerful performances. Performance art became popular world-wide and necessitated photography to record temporary works and performances by Christo, Dennis Oppenheim, and the duo, Marina Abramovic and Ulay. Lee Friedlander found art in the banal, poetically documenting what we see every day, but seemed to miss. And the Photo Realist painters started painting the cookie cutter suburban scenes that photographers were documenting. It was a feverishly creative time for the medium of photography, that spanned the 1960's - 1980's, exploding in the 1970's.

PDNB Gallery is particularly drawn to this decade in photo history. With the representation of artists from the era, PDNB has emphasized its importance in several exhibitions in the past 25 years.

Image: Bill Owens, I enjoy giving a Tupperware party in my house, 1971 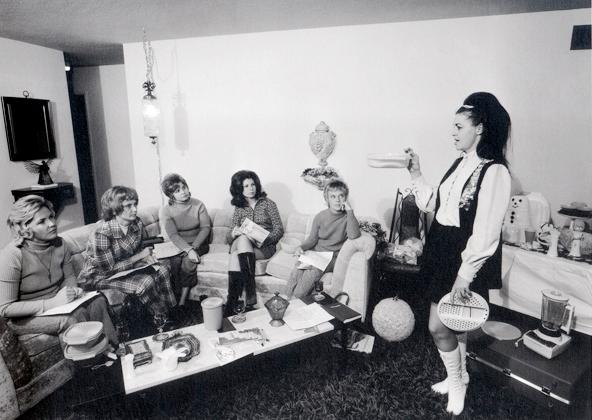