DDD Behind the Scenes: An Inside Look at the Home of Bill Hutchinson

Bill Hutchinson is truly a family man. His daughters Tess, Holly and Rachel are involved in marketing the Dallas Design District, and he and his wife, Kandis, designed their home to be the family’s cornerstone. Each architectural and design detail lends itself to both grand and intimate gatherings, from the pristine, white exterior to the oversized sectional in the great room.

4301 Lakeside Drive is nestled in a peaceful Highland Park neighborhood. Built in 1924 by architect Anton Korn, the house boasts 10,236 square feet, including six bedrooms, eight full bathrooms and one half-bath. Since it sits on an acre and a half, the home is considered an estate, increasing its value.

Bill and Kandis live in this beautiful mansion with their 11-year-old daughter and 6-year-old son, and the older Hutchinson daughters live close by. The family even belongs to the same gym, The Pilates Barre. Each Sunday, the entire family worships at Highland Park United Methodist Church, and after services you’ll find them gathered at Ascension or Mercat Bistro discussing the upcoming week.

Bill's reverence for God initially grew from having parents who were missionaries in Mexico, but it’s now evident in the look and feel of his home. There’s a winding staircase leading to the second level lined with candle sconces. The intricate details, extensive Renaissance art collection, stunning chandeliers and dark wood throughout echo this reverent theme. 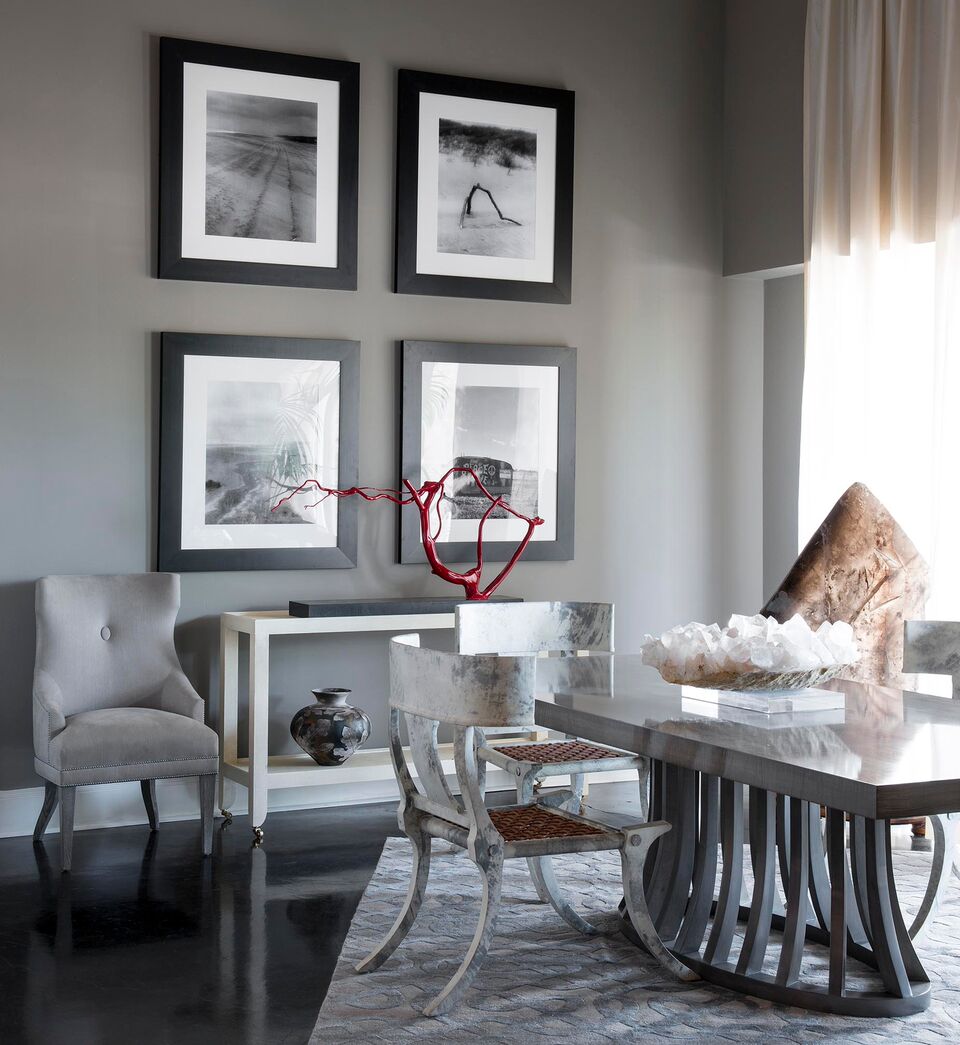 Designer Amy Berry considers the Hutchinsons’ great room one of her favorite projects. Bill and Kandis worked with Berry in all aspects of the design process with the goal of creating a beautiful space for family gatherings while supporting Design District tenants. The sectional sofa was a collaborative process with the Design District's Ebanista showroom. It took months to produce the custom fabric, lush velvet supplemented with strié, and extend the frame almost 20 feet to accommodate the large family. In addition, the room includes swivel chairs by Edward Ferrell and Lewis Mittman covered in fabric by Clarence House, found at Culp Associates. The benches are antique Jansen with embroidery by Frey "Broderie le Rocher" and cording from Samuel & Sons at Culp Associates. The sofa pillows are covered in Travers "Acorn Boucle" and Janet Yonaty "Check Velvet" fabric, found at George Cameron Nash, with Brunschwig & Fils cording. The curtains are Janet Yonaty damask fabric with custom-colored Janet Yonaty trim, both from George Cameron Nash. The curtain hardware is Houles from David Sutherland. Finally, the metal statue of a female figure was uncovered at Adriana Hoyos.

Hutchinson's company, Dunhill Partners Inc., owns the majority of the Design District's real estate, and his daughters are heavily involved in its marketing. The DDD has received comparisons to other successful design districts, including the Miami Design District, with its impressive blend of retail, galleries, international design showrooms and restaurants. The tenant mix is becoming even more diverse and vibrant, with plans for new restaurants and two boutique hotels in the works, including Dallas’ first Virgin Hotel. Quill, the district's first late-night lounge, recently opened on Oak Lawn, near Hi Line.

Hutchinson’s Dallas roots run deep, and with he and his family’s passion and enthusiasm for the area unabated, the Dallas Design District is on track to be the coolest destination in Dallas and beyond.