Then and Wow: The Evolution of the Dallas Design District

The story of how the Dallas Design District came to be a place to live, work and play begins with a flood. The flood of 1908, to be exact. This catastrophic event swelled the Trinity River to more than a mile wide and left it covering parts of downtown. By 1928, Leslie Stemmons, a fire insurance and real estate salesman, encouraged the sale of bonds to fund levee construction, and the old floodway land was divided up among members of the Industrial Properties Association. Stemmons believed a real estate boom was possible in the area after removing the Trinity River threat.

He was right, but it wasn't until after the Great Depression and his own death that his son John Stemmons sold land to a grain salesman named Trammell Crow, with whom he began building warehouses with unprecedented aggressiveness. Tenants had grown tired of old, multi-story brick warehouses, so Stemmons designed single-story structures with offices up front. Then, in 1952, Stemmons donated more than 100 acres to the Texas Highway Department for road construction, and the resulting freeway brought the Design District its biggest boom to date.

Crow used this strategy to create his own real estate empire. He sought to replicate the Chicago Merchandise Mart and its renowned trade shows by leading development of the Dallas World Trade Center, the Decorative Center and the Dallas Design Center. He created space to accommodate designers, art curators and other creative types, who began settling in the area.

In the mid-2000s, developer Mike Ablon and his Lionstone Group purchased 30 acres of the last Crow family holdings in the Design District and assembled roughly 39 buildings. Ablon believed that Hi Line Drive, with its sub-highway loop and connection to Victory Avenue and the Katy Trail had promise. This coupled with Oak Lawn Avenue running under the highway and connecting to Uptown, and you have an intersection ideally situated to become the hub of a new urban neighborhood. Alblon's vision attracted residential units, and spaces were leased to restaurants and retail shops. 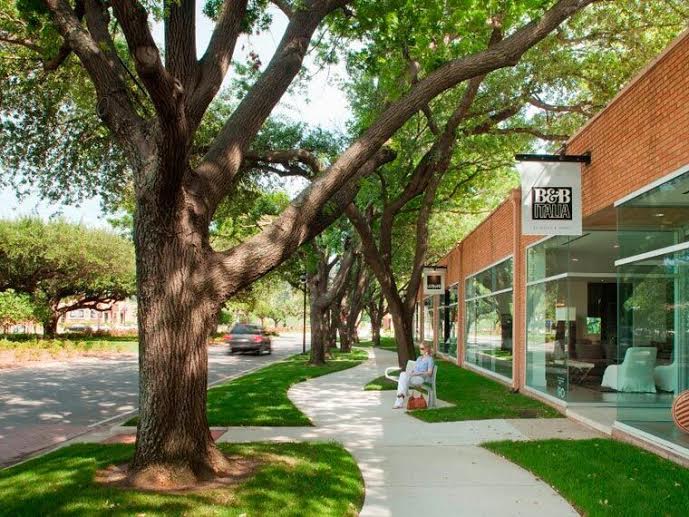 Fast forward to 2014, when Dunhill Partners purchased a large chunk of the district with plans to continue the area’s transformation from a collection of sterile warehouse to a thriving community, boasting a healthy mix of retail, residential, art, design and business offerings. The Design District is at the epicenter of the Dallas gallery scene, and nearby Slocum Street is now internationally renowned for its antiques shops, which include French and classical pieces, as well as mid-century modern furniture. Venture down Howell Street to browse some of the most interesting and unique vintage shops in the city.

With a bowling alley recently added, a Virgin Hotel and office tower soon to begin construction and monthly open-air markets, the Design District is continuing to expand and diversify. We aren't even close to taking a break.