Without further ado we present a sampling of recent art news and upcoming events in the Dallas Design District and before you even begin, mark your calendars for a big opening night this Saturday (April 5) on Dragon Street. Zhulong Gallery Opens in the Design District Newcomer Zhulong Gallery launches in Dallas on April 3. The gallery, located at 1302 Dragon Street, is designed to showcase new media art. Its opening exhibit, which is entitled Satellite, will introduce many artists the gallery will exhibit at various times throughout the next year. If you're unfamiliar with the term 'new media,' you're not alone. Think light, sound and high-tech art with a conceptual bent. Visit them on Dragon starting this month. Samuel Lynne & Edo Popken Host Art & Fashion Samuel Lynne Galleries is putting a slight twist on this month's art opening as they partner with Edo Popken for a special exhibit featuring well-known Dallas artist JD Miller and art by Mr. Edo Popken himself. The reception will run from 5pm - 8pm and just down the street Edo Popken's shop will also remain open late. 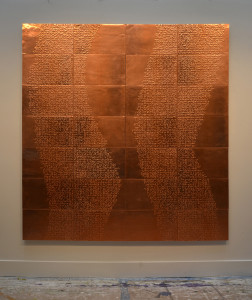 Kenn Kotara at Mary Tomas Gallery  Kenn Kotara's work might look like braille and that's because a lot of it is braille. Kotara is fascinated by the geometric nature of the tactile language and his solo show opening this Saturday at Mary Tomas Gallery explores his general fascination with nature, form and space along with the connections he makes between people and their environments. Kotara's show At the intersection of atoms will be on display through May 11. 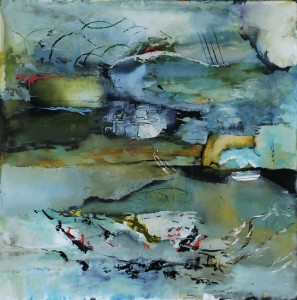 Katherine Houston & Lucrecia Waggoner: "Spring Eternal" at Laura Rathe  Laura Rathe Fine Art will present a group show featuring two artists who will be having their exhibition debut. Katherine Houston's bold abstractions will serve as a fitting complement to Lucrecia Waggoner's graceful sculptural installations at Laura Rathe's two-story space on Dragon. See the work of both artists at the opening reception this Saturday from 5-8pm. The show will run through May 10. Don Schol at PDNB In the vein of other non-photography shows they've produced of late, this Saturday PDNB will open a show featuring the linoleum cutouts of artist Don Schol. Schol's most recent work echoes the work of primitivists and more specifically, his experience with woodcarving. His early, figurative work, has morphed, in this more recent exhibit, towards a penchant for abstraction. PDNB will host an artist reception for Schol this Saturday and the show will run through June 21. 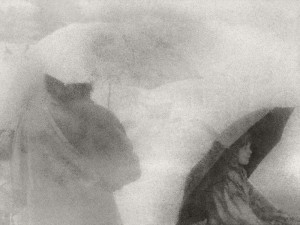 Jill Skupin Burkholder at Sun to Moon Gallery  Since PDNB won't be fulfilling your photography needs this month you'll certainly want to head over to Levee Street to see the work of photographer Jill Skupin Burkholder at Sun to Moon Gallery. Burkholder practices a number of old, handcrafted photographic techniques but more interesting, at least to me, is her conceptual practice of creatively overlaying the photographs with the emotions she felt when photographing the subjects of her compositions. We tend to think of photography as a medium in which its difficult to truly understand the artist, not so with Burkholder. See Burkholder's work at an artist's reception this Saturday from 5pm - 8pm.

Michelle Mackey at Holly Johnson Gallery  This month Holly Johnson Gallery will be featuring the art of Michelle Mackey in a show entitled "Afterglow." Mackey is a Dallas-based artist whose rather dark work "explores time and memory through abstracted architectural imagery." Similar to Burkholder's emotional overlay, Mackey begins with a photograph and then distorts the image with light, paint and anything else which would help her recreate her memory and recollections of the place. Specifically in this show Mackey will showcase a series of pieces which focus on a dilapidated Dallas gas station once inhabited by Clyde Barrow. You don't want to miss this. The show opens on Saturday April 5 with an artist's reception and runs through May 10. Leah Rosenberg and Shawn Hall at Galleri Urbane Over at Galleri Urbane Design District art lovers can get a splash of color from Leah Rosenberg and Shawn Hall. Rosenberg is a San Francisco based artist who explores connection through dialogue between objects in a painting as well as between paintings. She also explores, in her own words, the idea "that a color can stand in for a flavor or a feeling." Hall, who also utilizes bright colors in her work, explores nature through biomorphic abstract shapes, always implying without ever actually illustrating. The show opens April 5th with a reception from 6pm to 8:30pm. 3-Artist Exhibition at Craighead Green Gallery Craighead Green Gallery will be showing a group exhibit featuring the work of three artists working with different media.  Pamela Nelson is known for her lively acrylic on canvas paintings, sculptor Kevin Box will show a series of pieces made of paper and Rich Bowman's work on display will be composed of his sky-scapes. The show opens with a reception on April 5 from 5pm - 8pm and will run through May 10.